The Belgian Astrophilatelic Society BFV Cosmos has monthly meetings in Gent/Belgium. We discus astrophilatelic news, news about exhibitions worldwide and news about spaceflight, older projects and the latest news on manned and unmanned missions.

BFV Cosmos has an engagement to its members to procure all informations and tips needed to build up a nice and good astrophilatelic exhibit, according the Special Regulations and Guidelines for Astrophilately, as presented by F.I.P. (Fédération Internationale de Philatélie).

Our society has a rich history in astrophilately. We provide subscriptions to all kind of space covers (Europe, ISS, China, Japan, Russia, …) and eventually space (NASA) memorabilia on demand.

Our quarterly magazine Cosmos Express is published in two languages, Dutch and English.

If you want to join us, please have a look a our contact page.
We have more than 45 years of experience in astrophilately !

BFV Cosmos was founded in December 1971 in Gent on December 19th 1971 after some spaceflight enthousiasts got together and exchanged ideas on collecting space stamps and covers.
This new stamp club would unite space philatelists in Belgium and abroad and should provide services to the members and look for their interests.

Help promoting philately and especially promote space philately, without interference or moral coercion to the members.

The new society would also publish a magazine to keep contact between the board and the members. This publication should be a source of information on scientific and spaceflight activities, give advice on philatelic and astrophilatelic items and communicate on activities in the club.

In the early 1972, the number 1 issue was published as

The main article in this new philatelic magazine was written by the late Raoul Vanderstockt and entitled "Why this new postal stamp society ? "

Our magazine Cosmos Express on a time-line :

Due to high costs and lack of cooperation from the city of Gent, BFV Cosmos had to stop this series of exciting astrophilatelic exhibitions.

Board members of BFV Cosmos worked together with international astrophilatelists as members of S.A.F.A. in preparing the new Regulations and Guidelines for Astrophilately, finally accepted at the F.I.P. Congress in 1985.

In 1987, BFV Cosmos published a complete magazine on these new Regulations and Guidelines for Astrophilately.

More on this on our Astrophilately page. 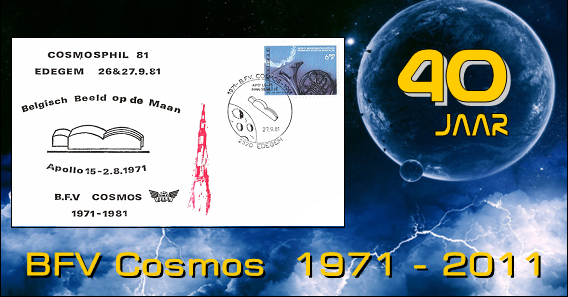